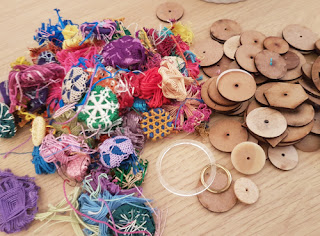 I have a pot that I put all the rejects that I make into.

Some are just fine - I've half made a button in a workshop for instance, as an example so that people can see the process. But, I'm not likely to finish it because it was illustrating a particular step or technique.

Or perhaps I've used a silk that's too fine for the design - so the definition just wasn't there, or the thread was too thick and just wasn't right, making the button look horrid.

Sometimes it is about colour - the colours just don't go well once they've been made and so I have to start again.

And at other times, there's a mistake. Something that can't be fixed at the time, and jumps out at me in such a way that I don't want any one to see them!

I will often just cut off the threads right away and start again. But, if I am on a roll - or I want to learn from the mistake or process - I will keep the reject for a while. And then it goes into the pot to be reclaimed.

The above is perhaps about 3 or 4 years worth, and all satisfyingly cut away and a pile of moulds ready to be used again.
Posted by Gina-B at 11:57 am