How to join Teneriffe Lace Medallions & Motifs - plus a few fillings / m...

I have been a bit lapse, haven't I? I have been keeping up over at the One Button a Week blog, but keeping two can be a bit hard sometimes. Sorry.
So here is a new video which I've been promising for a while. I hope it helps some of you!
Next week is a biggie - I'm launching the next book in the "Making Buttons" series - Zwirnknopf Buttons - on Create & Craft on Saturday at 3pm. So, there is a lot to do!

Watch this space - I'll pop a picture up in the week.
Thanks for stopping by
Posted by Gina-B at 11:31 pm 14 comments:

Hi everyone! It has been a little while since I updated this blog. Of course I am updating the One Button a Week blog every week (do pop over and have a look!), so I am not neglecting things really, I just haven't got that much to say. I'm sure you don't want to read me just writing for the sake of it!
I decided to try a slightly different take on things for this video. Goodness, that wasn't a good idea! Usually, I know what I am filming, do it in quite an organised way, and Mark is able to edit it based a lot of my silences - or simply by me turning of the camera for anything repetitive. Well, not this one. I did not know how this was going to turn out - or what I was filming. So the editing took forever - I had to do it as Mark couldn't remotely figure it out, and I had to narrate afterwards and it just took ages. Not really cost effective by way of time, haha. I hope that you enjoy it though.
Speaking of time, can you believe it is already nearly a month since we were last on Create & Craft? Well, we are back this coming Tuesday (the 26th) and the show will feature Teneriffe Lace. Which hasn't been on your screens for at least a year. I'm looking forward to it and have been making some lace (spoiler alert, there will at least one lace themed video next week to add to the playlist).

Take care of yourselves, thanks for stopping by, and have a great weekend - or week, depending on when you are reading this.
Posted by Gina-B at 12:32 pm 9 comments:

Hello everyone. We are living in troubling times, and sometimes it feels as though we shouldn't carry on with the "normal" things. However, when we can't do anything else, we probably should be normal. So, here's a new video. I had to make a set of tassels recently, and thought it would be good to film the process, in the hopes that I would be able to put together a video.
This was an odd process for me - I usually make something having planned what I will film, and what you need to see. Which can mean starting again if I think I missed something. This time though, I wasn't going to start again, as I'd ordered in the silk for the job!
So, I just turned the camera on, and then had to do a fair bit of editing
:)
This method of making matching, small tassels can be used to make literally loads - a long table, two clamps, and you can make all the small tassels you might need to add to, say, a fancy woven fringe.
In other news, have you been over to the One Button a Week blog? Wow, we've had some terrific buttons! There really are some incredibly talented people out there. Do pop over and take a look and be inspired!
Stay well and safe all of you.
Posted by Gina-B at 9:54 pm 19 comments:

It's our last show on The Craft Store this Saturday! 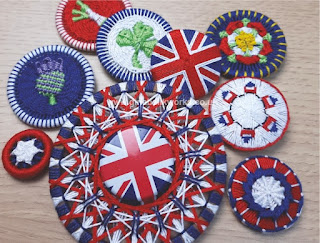 Yes, technically it will be our last show on The Craft Store, as from the 25th the name will change to Create & Craft. Which is a bit sad really. We'll be on at 10am, so an early start for us.
But in happy news - we will be launching two new button kits. Both kits will be exclusive to The Craft Store for a week, from then you'll be able to get in on our website as well.
I am not sure which kit I like the most. I guess I'm not supposed to have a favourite!
The kits are our Queen's Jubilee Buttons Kit - the buttons are shown above. I have to say I'm quite pleased with the leek as that was a worry when I first planned out the buttons!
The second kit is Bottle Cap Buttons. There are two colourways available, and you'll be able to make 6 buttons. The kit includes new bottle caps, and little stickers to use on your caps if you wish. 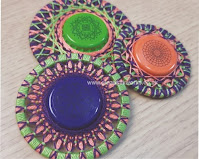 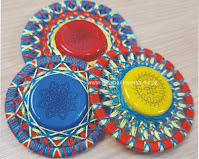 I'm still working on some bits for the big job - only a few before everything is more or less wrapped up on that I think. So for the next few days I will be packing kits, prepping the show and working on a few bits.