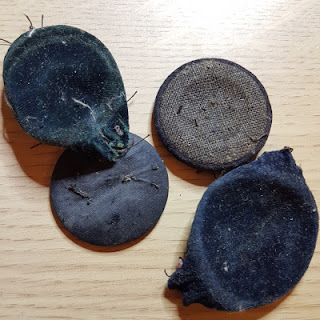 Many people will look at a box of fabric buttons and pick out any of the pretty ones - the fancy buttons, the ones that look like silk, or are crocheted. To a lot of people, the plain fabric buttons can really seem dirty or worn or just too boring to consider. But sometimes, they can hold a secret.
Any buttons that have a gathered back show that they have had the fabric put over the button mould by hand. These buttons, even when the fabric is beyond saving, are worth a second look.
By carefully cutting away the gathered stitching on the back of the button, you can remove the covering. Some will need to be cut away (but proceed with caution, as I'll explain further along).
Buttons with a wooden mould have a good chance of being professionally made - perhaps to match a garment. However, this isn't always the case, as you did used to be able to purchase button moulds at a haberdashery. But even these can be a bit of a surprise, and they can always teach you more about construction techniques. 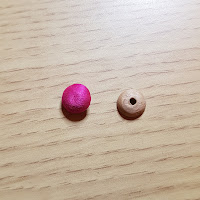 The little pink buttons have a satin covering. Its a medium weight fabric, so the covering has been placed right on the wooden mould. This mould is only about 9mm across. The stitching to create the covering was not in a matching thread - perhaps an indication of being homemade? 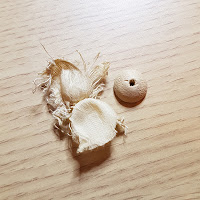 The beige button is perhaps older. The silk has been used as a double layer adding a bit of extra stability. The top layer of fabric had completely shattered. Again, a turned wooden domed mould inside, but this time, the sewing thread is a perfect match. 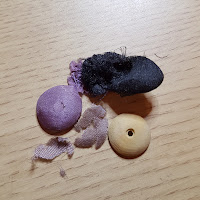 This one was a nice surprise. The top layer was black black silk. Not too fine, so only required the single fabric layer.

Beneath the black, a faded, a shattered fine pale lavender - over a second layer that has a much stronger purple tone to it.

The purple stitching was a perfect match to the fabric. The black stitching was too, but the thread itself a little thicker than that used on the purple. They are two distinct levels, indicating that the button was re-used and recovered after the initial sun damage to the lavender had happened.

Then there is the covered-covered button. The button mould is actually a fabric button that has been made using a button machine or press - so there is a metal back and/or front. The large buttons in the image at the top of the page are this type - a velvet/plush covering over a damaged cloth button with metal moulds. The damage to the original covering is quite obvious when the velvet was removed. 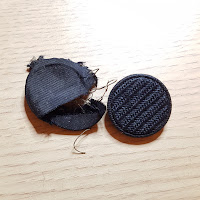 This is another - the inside button is a three-part with a thread back, and the woven front is probably a mohair / silk mix. This could be a very old button, and I'll be looking at it more closely in the future to see what I can discover. 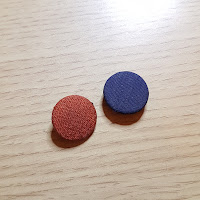 These plain blue buttons have a textured orange fabric button underneath. The button is a two part with a pad back, and as you can see from the picture, quite soiled. With such a drastic change in colour I suspect they were removed from the original item and used on something quite different. 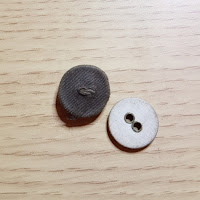 This already hard working, utility, machine made linen button has been covered in an equally hard wearing cloth. A cotton twill in a dark khaki colour, I wonder if it was made to replace a missing button on a kit bag or similar? Either way, this too is showing signs of wear along the edges. I like this button. 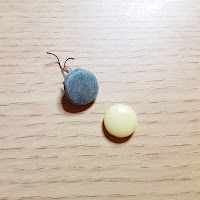 Then there are the surprises. Such as this little faded silk button - with a bone disc at the centre. I assume made to be a covered button right from the start, as there is no central hole. This silk is quite a pretty  light peacock blue on the underside. 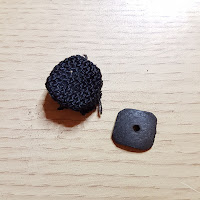 Or this - the fabric covering was actually quite thick, so the button did look a bit squarish, but not fully. And that's because the mould is a square, but with the corners trimmed. It is quite an uneven piece, so the thicker fabric allowed a far more even looking button to be made. 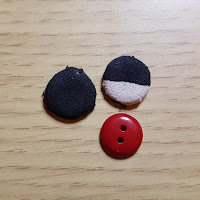 This one is one of my favourites so far. The fabric appears to be a fine black cotton - but there are two layers, and the bottom layer shows some patterning. These were sewn over a nice bright red button.

I image a home dressmaker, making a patterned something that needed one button - at the neckline perhaps. She chose the red button but just wasn't happy with it, so covered it with a bit of the offcut fabric....

However, nothing beats the find of my button collecting friend Cheryl Killam. She found a group of covered buttons that were so thick she carefully took apart the layers. She found four layers - and at the core - a beautiful, yet very faded - death's head button. Here is her image of four of the buttons - with each layer shown. How cool is that. 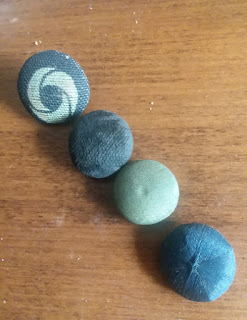 At the weekend, I lost a good friend to Covid far before her time. She was someone who was passionate about reusing and recycling - why she even presented Prince Charles with a reusable fabric bag once! She made so many reusable bags, literally 100s, that she would give away to anyone, she never took money for them. She would bring them to my workshops so that everyone could take away their makes. This post really is in tribute to her - showing how we can reuse instead of throw away.
Take care and stay safe everyone.