You know when you have a pet hate and it drives you a bit batty? Well, mine is the hastag #dorsetbutton.

It's a great hash tag when used on an actual Dorset button. And by that I do not mean where the button was made, but the technique.

Of course, we live in an age of hastags - and so for social media purposes, if we want anything found we actually need to use the hastag #dorsetbutton (or search terms) in order to pick up the audience who follow these things. I try to counteract this with the hastag #notadorsetbutton, but I suspect that like so much in an ever changing language, all ring buttons will come to be called a Dorset button in the future. And I'll just have to take a deep breath! ;)

But, in case you were wondering...

The cottage industry that was known Buttony in the Dorset area of England did make other types of button very early in the history of the trade. However, it is at the very beginning, (mid 1600s). By the time that ring buttons are being made the trade is quite specific, as it the technique used.

In Dorset thread button making, the ring is covered first.
Then the spokes are laid.
Then, the decorative weaving, or stitching is worked to strengthen the centre area of the ring.

This creates a very distinctive design and edge. The image of the back of a Dorset button below shows how the lines of the of the spokes is over the ridge of the blanket stitch covering. 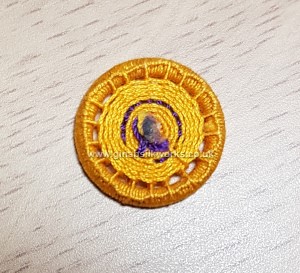 The pre-revival Dorset industry used linen thread. Not silk. Not braids or cords. In fact, it is very rare that a pre-revival Dorset button is coloured although there are a few exceptions, most notably the black Singleton buttons (although the whole black Singleton button is perhaps another discussion!). There are a few coloured thread buttons in existence and it may well be that they were dyed by the garment maker after purchasing the buttons.

These white on white buttons buttons could be washed at high temperatures. Apparently, the alloy used to make the rings was invented by the Case family to be rust free and was a secret "recipe".
And that is the reason the industry was devastated almost overnight when a machine for making linen buttons cheaply went on display at the Great Exhibition. Within 9 years the Dorset industry collapsed.

At around 1900, Lady Lees attempted to revive the industry, and at this point you begin to see slight variations, particularly regarding the use of colour, and it appears, a change of thread if required. This button card clearly illustrates what she was offering, the thread looks shiny and there are colours and even beads. The thread could be mercerised cotton, silk, or "artificial silk" - first invented in 1855 and often used in dress trimmings. However, if you look closely at this card, you will still see the tell-tale signs of covering the button first, and then working the spokes. Also, every one of these buttons is still made over a very fine ring, unlike other fancy thread buttons of the era. 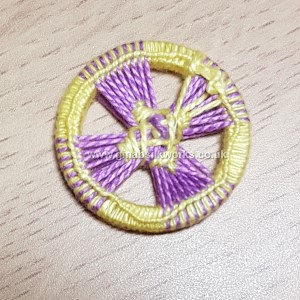 This is the back of a Zwirnknopfe button - made in Germany, Austria, and northern Europe. I don't know how long their history is exactly, but they certainly seem to have been a viable alternative to machine linen buttons in the late 19th century (perhaps why Lady Lees attempted the revival). This technique often uses a flatter ring and works the spokes first - then covers any space in the ring. You can see the ridge is over the spokes, creating a solid line at the back. There is even a little machine that works the spokes used in Austria - the video below shows the machine. This results in quite a different look to the Dorset technique. And, if on a fancy printed card, the chances are the buttons have not been worked using the Dorset technique, as the Dorset cottage makers weren't using printed cards.

Modern Dorset buttons use all sorts of combinations of stitches and colours. But they still use the same basic technique, covering the ring first.

There is no evidence that other types of needlework button, those worked over wooden moulds or with embroidery were ever made within the industry. Instead, button cards exist of passementiers or button makers working these fancy designs in many colours.

Likewise, there is no evidence that any crocheted button was made as part of the industry.