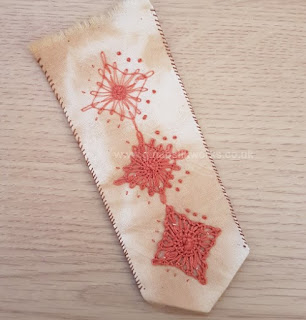 I'm often asked if a particular thread can be used for a particular technique - but I haven't always tried them. I am a great believer in experimenting though, as what may not work for one application may be wonderful for another.
Take Teneriffe lace for instance. Like all lace, the thread used should be strong, usually fine, and with a bit of body. It needs to be able to hold a knot - so slippery threads will often give poor results. If your intention is to make a lace tablecloth, then you really do need something designed for lace making - a lace thread or a fine crochet thread.
However, using wool to make flowers on a Teneriffe loom works a treat! And perle cotton (not as smooth as traditional lace threads) gives more option for colour and has the advantage of washing well.
But stranded embroidery cotton?
Normally, I would not recommend it, as it isn't actually that strong. But, I thought I'd have a play. 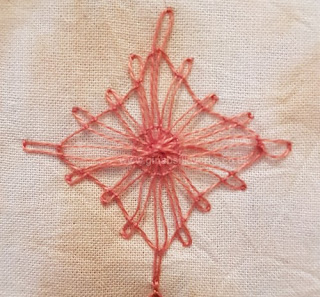 I'll be honest, this wasn't easy. I was worried I would break the thread, so took my time tying the knots. I think that this would be ok for the smallest motifs that are going to be appliqued onto something else, but you do need to be aware of how hard you pull the knots. 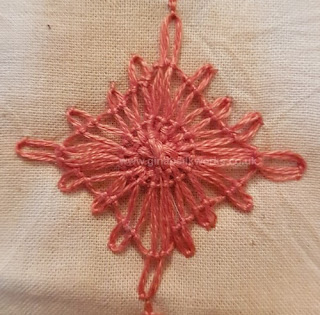 Better. I wasn't worried that I was going to break the thread. However, because the strands are not twisted tightly it is a little difficult picking up the correct threads to knot! You have to take care to get all of the threads.
Again, great for an applique motif, but not enough strength for a stand alone piece. 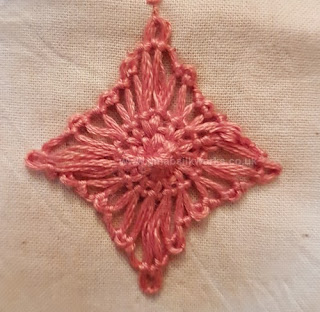 As you can see, quite nice chunky motif with the thread as it comes from the pull skein. I certainly didn't feel that I would break the thread at every knot. The fact that the thread had not been split into individual threads did mean it was a little easier to catch every thread when knotting.
I do still feel though that it would be best used an an applique motif.
I think that using stranded embroidery cotton does open up a lot of possibilities for colour - but I would only use it for pieces where I am securing the motif onto the fabric. And not as an insert. I don't think the embroidery threads on their own would be strong enough to withstand being used as "lace proper".
I reckon that if you were using it to make micro lace motifs for buttons say, then it would be great - just take care on those knots if you are using a single thread.
Stay safe everyone!
Posted by Gina-B at 5:05 pm