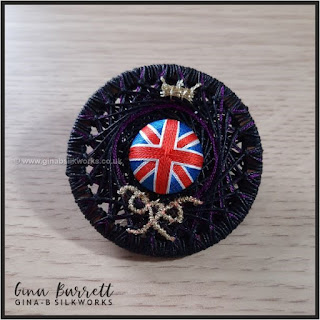 Of course, had I been working a button challenge this year, you would have all expected a commemorative button. This one took a little while to get right.
The silk thread Union Jack is over a vintage mould - perhaps even as old as the Prince. And I can call it a jack, as it is for a sailor.
The surround is a zwirnknopfe, not a Dorset button. A technique from mainland Europe to represent the ties he had to other European countries.
I have used purple silk - for royalty - and waxed linen. I chose this because it rather looks like horsehair so represents both the horseman and the down to earth person he seemed to be.
And, a little gold crown and his cipher of crossed P's.
Posted by Gina-B at 10:25 am