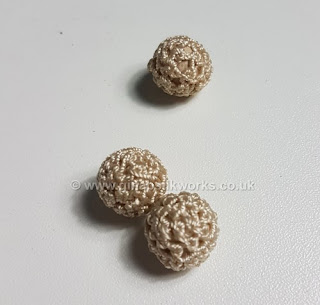 No video this week as we've been so busy packing after the shows last Friday, prepping for my Costume Skills Institute tomorrow, and actually writing some more of the book. I just didn't have time to do any filming. Well, filming isn't the hard part, it's the editing afterwards.
So, instead I thought I'd do another in my occasional series, Button Autopsy.
The crochet ball. So many of us who collect buttons have these. Lots of them. Some really discoloured too. Usually, like the ones here, they are white, sometimes black, and more rarely other colours.
Primrose Peacock, in her 1978 booklet "Discovering Old Buttons" has a small paragraph about crochet buttons -
"Machine and hand-worked crochet has been used as a button covering in many places, notably Ireland and France. The core may be either a wood mould or a soft substance such as kapok or wool, or in America cardboard. Hard ball-shaped buttons with loop shanks known as French knobs were popular with Edwardian Parisian prostitutes, which may account for their disfavour elsewhere!"
Nancy Nehring (50 Heritage Buttons to Make) adds a little more information -
"Early this century, Parisian prostitutes hung pearl [meaning crocheted balls] buttons from their clothing so that the movement attracted attention as they walked. No respectable Parisian woman would have used them on her clothing!"
Recently, I saw this image on the internet
Auteuil Racecourse, 1911 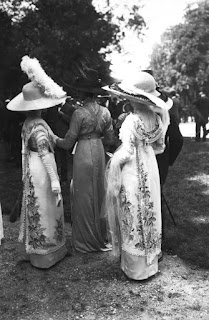 Those two women in the wonderful matching embroidered gowns - look closely, they are edged in little white balls! Crocheted? That's logical - pearl buttons or those with wood moulds would, I think pull down that fine fabric too much with the weight. Kapok filling would give far less stress.
OK, so not to speak ill of the dead... are we saying they are matching prostitutes?
hmmm. I guess I will have to see what else I can find about the crochet ball button in Paris!
So, on to the ones I've looked at.
They are approximately 13mm, so quite small. They average 6 rows of crochet. They are hard, but the filling will "give" if pressed hard enough. 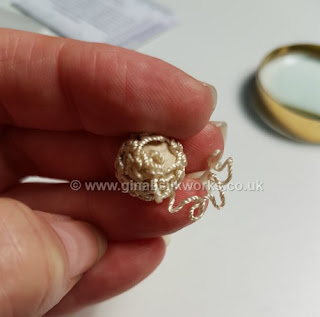 When unravelling the crochet, you can see that the mould looks very smooth, and light coloured. The silk is a 'Z' twist, 3 ply for those who are interested in these things.
Now, this might be artificial silk. Cross, Bevan and Beadle patented their artificial silk in 1894 (https://en.wikipedia.org/wiki/Rayon), but I'm not quite sure how to successfully test this at the moment.
Removing all of the stitching revealed the mould - 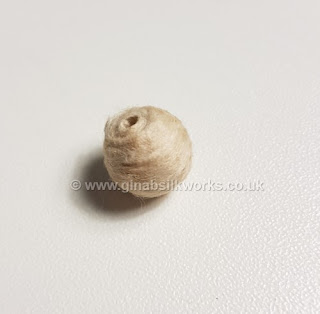 Very smooth, fibre, well shaped and with a hole - but only at one end. The hole does not go all of the way through (about 7mm).
The fibre is actually rolled to create the shape, probably while the fibre was wet, although starch or something similar may have been used. Think of a cotton ball, and how you can unroll it. This is obviously much denser, but the principle is the same. 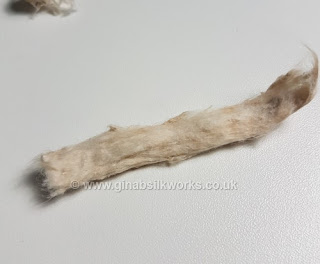 The best thing about this type of mould is that it can be gently washed. It often becomes harder and more dense I've found with some of my experiments using cotton (haven't tried kapok), as it shrinks a little. In fact, it is possible that these were made and perhaps plunged into boiling water.
Today of course, we can use crocheted ball button without risk being classified, and a great substitution for this mould is those little felted wool balls you can get.
Stay safe everyone!
Posted by Gina-B at 9:52 pm